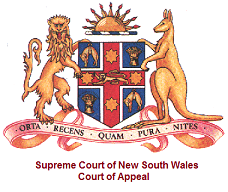 The Court of Appeal has dismissed a matter brought by Mr Landrey, which was removed into the Court of Appeal from the Supreme Court regarding the constitutional validity of ch 3, pt 2 of the Criminal Procedure Act 1986 (Cth). The Court found that committal proceedings are not an exercise of judicial power and ch 3, pt 2 does not create create circumstances where the judicial officer has been enlisted into the executive and given a non-discretionary duty to rubber-stamp a finding by an executive officer in breach of the principle in Kable v Director of Public Prosecutions (NSW) (1996) 189 CLR 1.

The Court of Appeal has dismissed an appeal brought by Australia Capital Financial Management Pty Ltd (“ACFM”) against a decision of the Supreme Court finding that Australian Financial Complaints Authority Limited (“AFCA”) had the jurisdiction to entertain a complaint lodged by Mr Bai and Ms Yang, which alleged unconscionable conduct by ACFM, and AFCA had the jurisdiction to award the remedy it did. The Court found that the judicial review of a decision by AFCA as to whether a complaint falls within the scope of its functions is subject to constraints on judicial intervention such that there was no reviewable error on the part of AFCA, the primary judge did not err in finding that the amount of compensation awarded did not exceed the $1 million limit and AFCA’s conclusion, that the guarantee and mortgages given by the appellants were unfairly obtained, was open to it.

The Court of Appeal has dismissed an appeal brought by Mr Zaya against a decision of the District Court finding that the white van which caused Mr Damirdjian to lose control of his motorcycle belonged to Mr Zaya. The Court found that the primary judge erred in finding that Mr Zaya was liable as the owner of the white van involved in the accident because the primary judge failed to give cumulative effect to several evidentiary matters which cast strong doubt on the reliability of evidence by a witness, Mrs Douglas. However, the Court further found that the primary judge did not err in concluding that Mr Damirdjian was not contributorily negligent.

The Court of Appeal has granted leave to appeal and dismissed an appeal brought by Mr McMurchy and Mr Kumaran, who were employed by Employsure Pty Ltd (“Employsure”), against a decision of the Supreme Court finding that exclusive employment covenants in their employment contracts were reasonable, that Mr McMurchy breached those covenants, that a post-employment restraint for nine months was reasonable, that Mr McMurchy breached his contract by encouraging Mr Kumaran to leave his employment with Employsure and that the company to which they moved, ELMO Software Ltd, assisted in this breach. The Court found that Employsure’s legitimate interest in Mr McMurchy’s performance of his duties included that he devote the whole of his skill, time and attention to his duties, that he observe his obligations in respect of confidential information and that a post-employment restraint of nine months was reasonable for Mr McMurchy but not for Mr Kumaran who would not remember most of the confidential information. The Court further found that the primary judge did not err in finding that Mr McMurchy materially influenced Mr Kumaran’s decision to leave Employsure

The Queensland Court of Appeal has dismissed an appeal brought by WorkCover Queensland (“WorkCover”) against a decision of the Supreme Court of Queensland finding that s 168 of the Workers’ Compensation and Rehabilitation Act 2003 (Qld) refers to a person’s entitlement to compensation rather than the circumstances under which a person was found to have an entitlement to compensation and that WorkCover’s termination of Mr Yang’s entitlement to worker’s compensation be set aside. The Court found that once a claim is accepted, it cannot be unaccepted unless the incapacity for work related injury stops or other statutory limits are met or, subsequent to the provision of a notice of assessment. In dissent, Morrison JA found that WorkCover’s decision was not that an entitlement never existed, but rather that the claimed injury did not ground payments in the future.

Admiralty and Shipping: arrest; practice and procedure of action in rem

The Court of Appeal of Singapore has allowed an appeal brought by Jeil International Co Ltd (“JIL”) from a decision by the High Court of Singapore upholding the warrant for arrest of The Jeil Crystal, a vessel owned by JIL, despite the original claim in the warrant for arrest having never existed. The Court found that the primary judge erred in assuming that an amendment to the relevant statement of claim would have a corresponding effect on the in rem writ and the warrant of arrest and that The Amigo [1991] 2 HKC 491 does not necessarily stand for the proposition that a subsequent amendment to pleadings cannot justify the issuance of a warrant of arrest that was wrongly issued.

The United Kingdom Judicial Committee of the Privy Council has allowed an appeal brought in relation to two unconnected appeals which raise common issues about the nature and scope of the right of a trustee under Jersey law to recover from or be indemnified out of the trust assets in respect of liabilities and other expenditure properly incurred by the trustee. The Court found that the right of indemnity confers a proprietary interest in the trust property in favour of the trustee, the pari passu rule of priority should be preferred as it is more appropriate in the case of trustees all serving together, and where serving under a rolling succession. In dissent, Lord Richards, Sir Nicholas Patten and Lord Stephens, considered that there is no reason why the “first-in-time” rule should not apply.

To subscribe to the Decisions of Interest Bulletin, send a request to courtofappealwebsite@courts.nsw.gov.au to receive an email when a new bulletin is published.

To view previous editions of the Decisions of Interest Bulletin, please click here.